The Disappointing Holiday of Hannah Vice

I love this postcard of St Michael’s Mount, Penzance, which was posted to Mrs W J Vice of 222 Clarendon Park Road.  Not because of the picture, but because of the message from Hannah expressing her very English dissatisfaction with her holiday.  Listen to this:

The weather is just as dull as it was at home.  Not much sea and rather a dirty brown.  Did you come here as well as Swansea?  I forget!  There are some nice public gardens but small.  Went to the Baptist Chapel twice yesterday.  Yours with love Hannah.  Penlee Villa, Redinnick,  Penzance.

Poor Hannah!  I’ve been to Penzance once and it was lovely, although the sun was shining and I’ve never been a fan of large public gardens. 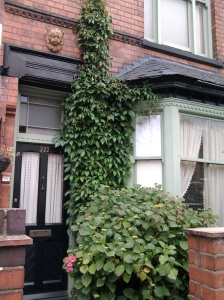 It’s a pity Hannah didn’t enjoy her holiday more because it was probably the last one she took for a long time.  The postcard was sent on 1st September 1913, not long before the onset of World War.  My mother in law is off to Penzance in a few weeks – here’s wishing her blue skies and a sparkling sea.  Regards, Elizabeth.

Posted in Old postcards and photos

This advertisement is so interesting to me.  It typifies us so many things about Victorian Clarendon Park life.

Number 241 Avenue Road Extension was a shop.  In 1891 it was occupied by John and Elizabeth Clayton (and her mother), who also kept boarders.  Census night was 5th April 1891 and E.L., whoever he was, had presumably found a job and moved out.  He was almost certainly a boarder rather than a family member (Elizabeth’s maiden name was Rawlins).  There was a surprising amount of mobility in and out of Clarendon Park, and also within it – a bit like the student population today I suppose.  Boarders were particularly likely to move frequently, in search of better landlords or a more convenient location.

As to  E.L. – well, I have found in 1891 a waiter by the name of Emanuel Leiter, aged 23, in an hotel run by Emily Cunningham at 51 New Bond Street, Mayfair.  He was born in Switzerland, so he may not be the same person.  Then again, he may be – people weren’t always entirely honest about their age and minor details like their nationality in these adverts.  They knew that employers were prejudiced against foreigners and those they felt too old or too young for the job (especially domestic service).  E.L. may not even have been his real initials:  People sometimes changed their names to more ‘suitable’ ones for their profession, again especially in domestic service.  It has to be said that Emanuel isn’t a very Victorian Clarendon Park name – I was expecting something more prosaic like Edward or perhaps Ernest.

I tried to take a photo of 141 Avenue Road Extension but once again I CAN’T FIND IT.  Is the extension some kind of Bermuda Triangle?  If anyone feels like looking for it, or even showing me how the numbering system works on that godforsaken road, I would be only too grateful.  In the meantime, regards Elizabeth.

HUGE apologies for this being the first post in a very long time.  Real life work commitments have been keeping me from going to the record office, and I have barely sat down to do anything historical in weeks.  But enough about the high-pressure Clarendon Park life we all lead today (cue violins), and more about the past.  I thought we’d start afresh with Howard Road, one of my favourite parts.  It’s a bit like Clarendon Park Road in that there is a real mix of housing, though none of it as grand.  There is/was a sprinkling of shops and businesses, but of a smaller and humbler nature as they are not on a main thoroughfare.  Several purpose-built shops have now been converted into houses, but a few linger on.  Here is a snapshot of businesses in 1911, from the census and Kelly’s Directory: 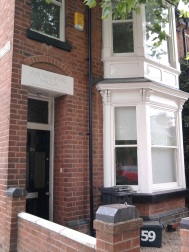 It’s worth mentioning that the lower end of Howard Road (towards Welford Road) was still pretty new in 1911.  Many of the houses from about 90 onwards were not built until 1903-6.

There were never very many businesses on Howard Road, because unlike Clarendon Park Road it’s not a main thoroughfare – especially now that it has been divided up for traffic calming.  There are only a handful today and several have been converted into housing like number 77, which in 1911 was a grocer and confectioners, and was last used as a general corner shop and off license.  It stood empty for many years and was a bit of an eyesore until it was renovated in 2009/10 and converted into two houses.  The old off license illuminated sign was still there until a few months ago.

Anyway, it’s good to be back and I promise to be a better Yourhistories from now on and not to get distracted by other things.  Yours, Elizabeth.